When you turn 17, you can’t vote, serve on jury duty, join the military or even purchase a lottery ticket. However, if you’re 17 you’re automatically charged, jailed and imprisoned the same as an adult, even for the most minor offense. Missouri is one of the only 5 states that automatically try 17 year olds in the adult court system. Every other state has already adopted the nation-wide movement to Raise the Age. 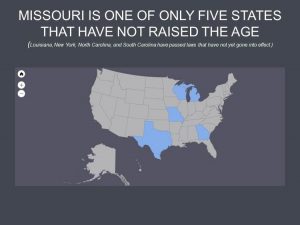 Missouri Senator Wayne Wallingford(R-Cae Girardeau) introduced a bill (SB 793) to Raise the Age and on May 7th, the state House then passed the juvenile justice reform as HB 1255. THB 1255 is sponsored by Representative Nicholas Schroer(R-O’Fallon) and is currently headed back to the Senate for more revision. The momentum behind this bill from both houses could pass this bill before the session ends on May 18th.

There are many reasons to Raise the Age. A study conducted by the Clark-Fox Policy Institute at the Brown School at Washington University summarized the research that led to the Raise the Age movement. Youth penalized in the adult criminal justice system demonstrate an average threefold increase in recidivism, compared to the juvenile justice system which is shown to decrease recidivism by an average of 34 percent. This is most likely due to the developmentally appropriate resources for rehabilitation that are available within the juvenile justice system.

A psychologist from Brown School, Sheretta Butler-Barnes goes as far to explain that, “Teenagers are still developing cognitively, it makes sense to enact policies that ensure that incarcerated youth are developing in environments most conductive to preserving their safety and encouraging their rehabilitation.” 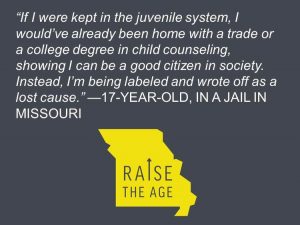 Child offenders that are penalized in the adult system extends further than their release. A criminal record will create substantial barriers for employment, education, housing and military service. These barriers are being raised against kids that can’t even vote yet, haven’t graduated from high school and are having their lives stunted before it really even begins. If these kids are tried in the juvenile justice system, they won’t face the same obstacles which can yield higher lifetime earnings, increased tax revenue and a greater benefit to our society. If you’re interested in showing your support for HB 1255, contact your local Representative and Senator today by clicking here.