It’s one of the more uncommon ways to get caught speeding, but speeding violations that are detected by an airplane have developed a reputation for being one of the hardest types of tickets to successfully fight. There are, however, a great many nuances that may work to your advantage if you find yourself being informed that you were caught speeding by an airplane that you probably never even saw. 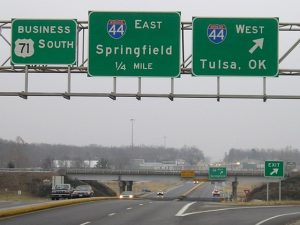 Missouri, like most states, employs a group of pilots to monitor traffic speeds in various areas. The force is small, consisting of ten pilots and six single-engine Cessnas, so the odds of being caught by one of these planes is pretty small. The pilots use either radar or a method called “gap timing” to determine the speed of the vehicles they monitor. Radar on a plane works essentially the same as a radar gun used by a patrol officer. There is some potential for accuracy issues when you consider that the radar beam is traveling a greater distance to reach a specific car from an airplane than from a patrol car, however radar readings are more difficult to defend against despite this.

The gap timing method requires the pilot to hit a trigger when he sees a vehicle pass a particular marker on the road, and then hit that trigger again when the vehicle passes another marker placed a certain distance from the first marker. This method introduces more room for error, and can be more easily fought. The reaction time of the pilot in hitting the trigger is the primary source of error. If the pilot if off by something like half a second in hitting the trigger, it can result in substantially different speed readings for the vehicle in question.

This error is inflated further depending on how long the stretch of road between the markers is. Shorter measurement areas allow for greater influence of reaction time error. Furthermore, the pilot may not be consistent in when he initiates the trigger, since at the altitude the plane needs to maintain to fly, the cars appear quite small. Hitting the trigger when the nose of the car hits the marker versus when the entire car has passed the marker can introduce more error in the reading.

Of course, if you’re found to be speeding excessively, the relatively small range of error won’t help your case much. For violations in the 10-15 mph over the limit range, though, this can be sufficient to introduce some doubt into whether you were actually speeding. Beyond measurement error, it is also useful to consider who your actual accuser is in the case. If you arrive at the court and find that only the patrol officer who issued you the ticket is there, you can suggest that the case be thrown out because his testimony is hearsay. The patrol officer did not take the actual measurement of your speed, the pilot did. Without being able to face your accuser, in this case the pilot, you have reasonable grounds to request that your case be excused.