There have always been a variety of misunderstandings when it comes to the rules of the road. Some are the result of the lasting impressions of old driving laws, others the state of popular opinion when it comes to how drivers should behave. Understanding the reality behind these driving myths, however, can be hugely beneficial to those who prefer to operate within the confines of the law.

Using a cell phone while operating a vehicle, especially to text, is incredibly distracting and unsafe. Stories of the consequences of such behavior are numerous. Almost all mobile devices now come with some sort of hands-free option now because of the hazards they present to drivers. However, bans on cell phone use while driving vary from state to state. In Missouri, only texting while driving is outlawed, and only for novice drivers under the age of 21. While you can’t be ticketed for it, you should consider the safety of yourself and others before picking up your cell phone.

Myth #2: You’re never allowed to pass a vehicle on the right, even on a highway. Reality: False 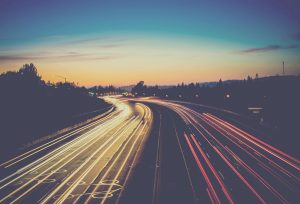 This common misconception is probably the result of the confusing wording typically found in most laws. It is illegal to pass someone on the right if it requires that you leave the road or enter an emergency lane. This is usually the case if you’re traveling on a road with only one lane of traffic in each direction. In this case, you should wait until it’s safe and legal to do so, and pass the vehicle using the lane of traffic going the opposite direction. If there are multiple lanes of traffic going in the same direction, you may use any available lane to pass a vehicle, as long as you do so legally, using your signals and avoiding speeding.

Some states, and even specific cities within states, have specific laws on U-turns. Generally, however, the opposite of this myth is true; it is legal to complete a U-turn at any time, unless there is a sign specifically prohibiting such action. Missouri law also prohibits U-turns in cases where such a maneuver would be unsafe, particularly near curves or hills where oncoming traffic would not be able to see a slow-moving vehicle.

Myth #4: Entering an intersection when the light is yellow is illegal. Reality: False

This is yet another case where the law varies from state to state. However, as of 2013, Missouri has adopted the ‘touchdown’ rule for yellow lights, which actually makes it more difficult to be ticketed for running light. Under the new law, a vehicle may legally enter an intersection while a stoplight is yellow. If the light turns red while the vehicle is in the intersection, it is not considered running a red light. Drivers hoping to reach the intersection before a light turns red should still avoid accelerating rapidly or speeding to make the light, however, as these actions can still be ticketed.

Myth #5: No open containers of alcohol are permitted in the passenger compartment of a vehicle. Reality: False.

Missouri is one of only seven states in the U.S. to continue allowing open containers in vehicles. The driver, of course, is not permitted to consume alcohol while driving. Passengers, however, may possess and consume open containers of alcohol while the vehicle is in motion. Several city governments have drafted laws against open containers, so it is worth looking into your local laws before letting your friends take advantage of this law in your car.