Jefferson Avenue is a popular route in North Springfield. If you’re familiar with the north side, you’ve probably seen or used the Historic Jefferson Avenue Footbridge. This 562 foot long bridge is an important transportation route for businesses on Commercial Street, as well as citizens from neighborhoods to the north.

The bridge overlies 13 tracks of the Burlington Northern rail yard from Chase Street to Commercial Street and has done so for over 100 years now. Built in 1902, the footbridge has become a Springfield icon and was placed on the national register of historic places in 2003. This bridge isn’t only used for transportation, however. Many people enjoy leisure time at the bridge. As you can imagine, train watching has always been a popular past time here. Many bicyclists also take advantage of the thrill of the bridge.

However, in 2016 during an inspection, it was determined that the footbridge was compromised due to weather and old age and may be hazardous. From there, the City of Springfield had to decide whether to repair, replace or remove the historic landmark. In January, Springfieldians were hopeful when it was announced for the first time that city leaders were working towards a full rehabilitation of the bridge. 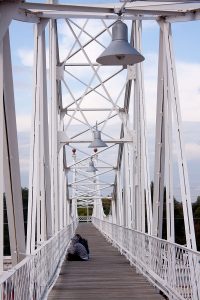 Even after this full make-over, estimated to cost $2.8 million, the bridge will need to be rehabilitated every 24 years- totaling $16.8 million over the course of the next 85 years. The design was expected to take 6 months and cost around $200,000. These expenses are to be paid for by the 1/8-cent transportation sales tax. 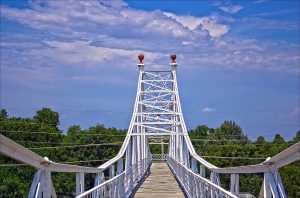 Fast forward to April, 2018. The city council members voted on a resolution to start seeking bids on fixing the footbridge. However, the vote was 7-2 to table the $2.5 million proposal until May 7th. In an interview conducted by OzarksFirst.com, Cora Scott with the City of Springfield explained that there is still a lot of work to do before the council can make a decision on how to use that money.

Last night, May 7th, City Council re-voted on the proposal, which was passed 8-0. City Council member Kristi Fulnecky was not in attendance at this specific meeting. The city manager will now begin seeking bids on rehabilitating the bridge, which will remain closed due to the above mentioned safety concerns. While $2.5 million is the expected cost of this rehabilitation, two million of that will come from a federal grant.

With this historic landmark right in our neighborhood, most Springfield citizens can recall good memories, beautiful views or fun facts about the footbridge. Did you know it’s the longest footbridge in America? Yes! Even longer than the 546 foot long Rusk Footbridge in Rusk, Texas. You can stay tuned to our traffic blog for updates on the future of the Jefferson Avenue Footbridge.